Pseudo-enthusiastic ‘amens’ from the preacher’s listeners placate — for now — his discomfort with their unresponsiveness. 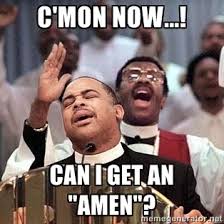 Now, it’s good that people be alert to the preaching and broadly responsive to it. But when speakers deliberately elicit a response like this, it is unhelpful, for several reasons.

For a start, a typical congregation includes a wide range of personality types. At one end of the spectrum is the excitable extrovert who starts gushing at the slightest provocation. He will ‘amen’, whether there’s something to ‘amen’ at or not. At the other is the thoughtful introvert whose natural bent is to keep her feelings — and her responses — to herself. So it’s unreasonable to expect a standard ‘Amen, brother!’ from everybody.

But there’s also a congregation’s ‘group personality’. This shows in learned behaviour moulded chiefly by the nation, race or society to which the individuals belong. In my experience, for example, Americans and Africans tend to be more vocally responsive than the British, who are famous for their ‘stiff upper lip’. That’s why some American preachers I have known, who are used to a certain type of response on their home turf, are thrown by the more subdued attitude they find when they first preach in Britain. That’s when you’re likely to hear the frustrated, ‘Do I hear an “Amen”?’

A second reason this is unhelpful is that it puts the preacher’s personal need above the message he is preaching. No matter what truth he is presenting, what comes over is, ‘I’m feeling a bit of rejection at your quietness. Please meet my need for reassurance by voicing your amens!’ But the aim of preaching is surely to inform, encourage and challenge the listeners, not to boost the preacher’s self-confidence.

And thirdly, calling for a vocal response is inevitably unproductive. Yes, the preacher-pleasers will dutifully call out, ‘Amen, brother. Preach it!’ or whatever. But it’s meaningless; they are only doing it because he asked for it, not because their hearts were stirred to do it by the power of the message. Even worse, the request will cause the less pliant personalities to dig their heels in and become even less responsive. Some might even mutter, ‘Not on your life, mate!’

Years ago, in my own preaching, I came to a place of peace about congregational response. I would work hard at preparing my message. I would pray about it earnestly. Then, when I stood to deliver the word, I would trust the Holy Spirit to apply it in his own way, and I was determined not to be either elated or disappointed by the people’s response. It’s a good place to be.

If some people got watery-eyed, or said a soulful ‘Yes!’, I’d press on regardless. If others got glassy-eyed or nodded off, I wouldn’t be fazed. Of course, a bit of clear positive response is gratifying, but the last thing I want is to be dependent on it. When I’m in my seat listening to another preacher, I’m not a greatly responsive person, at least outwardly. I listen carefully. I weigh what is said. And when something hits home with me, I quietly tuck it away, to be brought out, prayed over and put into practice later.

I went to a church to preach once, years ago, and it was a bad experience. I didn’t feel comfortable. My words didn’t flow well. There was a bit of an atmosphere and, afterwards, though I stayed for the cup of tea, I couldn’t get away quickly enough. The whole sermon had felt disastrous.

A couple a years later, to my surprise I was asked back. Remembering the previous bad experience, I went with some trepidation and much prayer. I arrived quite early, so was there as the people came in. One lady spotted me and did a double-take. Then she made a bee-line for me.

‘Hello,’ she said. ‘You came to preach here once before, didn’t you?’

‘Yes, I did,’ I replied, wriggling internally with embarrassment at the memory.

‘I’m so glad to see you,’ she went on. ‘I just want you to know that the message you brought last time was spot on for me. It was a major turning-point for the better in my life. Thank you so much!’

I learned a lesson that day: never to judge a sermon’s impact by the outward signs in the people, whether negative or positive. Do your best, and leave it to God. Yes, genuine amens are better than hollow ones, but none of them matter all that much.

This entry was posted on Wednesday, December 5th, 2018 at 14:52 and is filed under Christian comment. You can follow any responses to this entry through the RSS 2.0 feed. You can leave a response, or trackback from your own site.