Series: Observations about the conduct of meetings in the so-called ‘new churches’, from an older person’s perspective—1.

Hearing deteriorates as folk get older—as I know from experience: my hearing aids are very powerful ones. One feature of this deterioration is losing the capacity to ‘filter out’ one sound from other, competing sounds, and focus on it .

This means that, if someone is speaking in church—praying, perhaps, or making some connecting comment—and a guitar or keyboard is playing at the same time, it is virtually impossible for many of us to make out what the speaker is saying, as the frequency of the music almost always overrides that of the speaker’s voice. 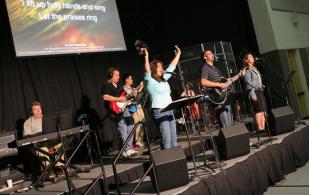 That’s why it is immensely off-putting to older folk when music is played in the background all the time during the open time of worship. This has, sadly, become the norm in some churches, but I regard it as an undesirable practice. Not only does it prevent some of us from hearing any simultaneous oral contributions. It also inhibits such contributions from the congregation. Few people are confident enough to chip in while music is being played, especially when they feel they will have to raise their voice higher than is natural for them if they are to be heard above the music. So they keep quiet—and we are the poorer for it.

Music and song do not equal ‘worship’; they are simply one of many expressions of it. When we gather as a church family, our corporate worship consists in, not just the singing, but the prayers, testimonies, prophecies, tongues and interpretation, relevant Scripture passages etc.

Musicians and stage-singers have an unfair advantage here, in that they are in position at the front, with microphones, and can thus inhibit or face down contributions from the floor. For this reason, they need to be mega-sensitive to the presence of the congregation and ideally should stop playing immediately if someone in the congregation begins to pray out loud or whatever.

Some would discourage ‘from the floor’ contributions anyway, favouring the ‘front-led’ approach to meetings. The congregation then become, not participants, but observers. It’s a negative trend, I believe, possibly reflecting an unhealthy desire for control on the part of the leaders. Certainly, it’s hardly ‘family’ anymore; it’s a performance. And, to be honest, I often find it boring—though I always try to keep a positive attitude. You never get bored when there are contributions from the floor. Some of them may be a bit messy but, to me, that’s part of what ‘family’ is all about. It’s real, and I think the Lord loves it!

I know from experience that it’s possible to welcome contributions from the floor with congregations up to about 150 in number, provided the musicians are sensitive and know when to keep quiet. After that, the dynamics change. But I’d argue that, once numbers reach 150, it’s time to split the congregation into two of 75 each anyway, to keep the ‘family’ atmosphere that the New Testament presents as central to the church’s very nature. Small is beautiful!

What do you think?

[For other blogs on this theme, click Music and Worship under CATEGORIES at the top-right of this post]

In the ‘new churches’ today, the trend is towards big buildings, concert-style auditoriums and slick programmes of activities. But some don’t care for that, holding that small and more intimate is beautiful. Here’s a book that argues that case. It is:

Grassroots Christianity: The church as it was created to be by Duncan Kellard (Authentic Books, 2009). 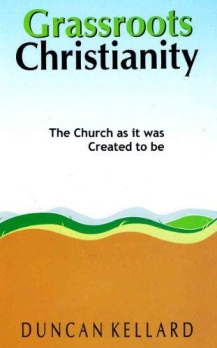 Kellard argues for home-based, small-group churches with few or no paid leaders, where the emphasis is on wide member-participation, the leading of the Holy Spirit and the sharing of everyday life together. His argument for it is twofold—one aspect of which I agree with wholeheartedly, while the other I view with some scepticism.

The first is that ‘it works’. He is frank and open about the problems this model can throw up, but he reckons that they are worth it for the benefits it brings. And these are, among others, that it is best for developing individual character and Christlikeness, for allowing scope for the Holy Spirit to use every single member’s gifts and contributions, for producing relatively stress-free leaders, for reaching the unchurched, and for coping with opposition. I believe he’s right. He cites the millions in the ‘underground’ churches in China as a living example.

His second argument is that this model is ‘the biblical pattern’ (his own phrase). I’m not sure about that. His approach assumes that, in the New Testament, we have some kind of blueprint as to how church should be, and that the modern type of church with a smart building, a worship band, stage-led meetings and seats facing the front, run by frazzled, paid pastors, is failing chiefly because it departs from the ‘biblical model’.

Kellard’s arguments are a bit naïve in places, to my mind, but there’s no denying that he is speaking, with utmost sincerity, from wide experience of both types of church, and the huge number of real-life cases he quotes is one of the book’s strengths.

You may feel that he over-emphasises the either/or of what church should be like, and that there is a good case for both/and. Or that the two models could in some way be combined, as when a church of several hundred active members has a thriving cell-group structure. You must make up your own mind on that. But, wherever you stand, you will find plenty in this book to make you think—and maybe to make you tweak your church methods.

Here are some quotations.

Inspiration releases life; institutionalism eventually quenches it. Because the tendency of any significant movement is to become institutionalised, the best, longest-standing examples of simple, inspirational church life occurs where either persecution or poverty prevent the church from becoming more ‘sophisticated’, and the raw, rustic state is maintained and multiplied. (p18)

The premise of this book is that far from helping us attain the life of the early church, the trappings of organisation and institutionalism often hinder it and, more alarmingly, cloak a loss of vital purpose. People are preached to but wouldn’t choose to be called ‘disciples’, they experience high-quality music, but often struggle to engage in worship, they fund expensive missions but may lack the boldness or desire to share the gospel with friends or colleagues.  (p21)

The grassroots quotient: ‘Our dependence on God is inversely proportional to the value we set on human method and ability.’  (p23)

In traditional churches, there may be ‘home groups’ for the keen ones in the mid-week, but real church is perceived as what happens on Sunday. New churches, ironically, usually burst into life spontaneously in homes. But when they outgrow them, rather than starting new local home meetings, they move into a hall or school and the intimacy, participation and flexibility begin to wane immediately. (p30)

[Re participation in meetings]  There are two dynamics here. First, people speak up in home gatherings in a way they are reticent to in the more formal setting of a hall. Second, quite simply, the more people in a meeting, the fewer will actively take part.  (p37)

In a recent sabbatical I visited a number of churches over a twelve-week period. I was taken aback by two things. One was the ‘sameness’ of what went on in terms of style, length and even choice of songs. The other was the palpable sense of boredom and passivity among many in the congregations. They knew what would happen, and that it was the same last week, and that it would be next, too. The shocking thing is that these were, for the most part, charismatic churches reputedly at the vanguard of radical renewal. (p41)

One of the most moving and satisfying aspects of our journey from structured, front-led church to flexible body-life church is the way children have naturally moved in the Spirit and used their gifts.  (p48)

As leaders, we must abandon status, shun selfish ambition, relinquish comfort and resist being controlling. Instead, we rejoice in others’ elevation, delight in unrecognised service, revel in making sacrifices and excel in releasing others into fruitful ministry.   (p63)

The critical issue for the western church today is that we are rich in the things that don’t matter. Professionalism, real estate, communication technology and sophisticated structure and programmes. Yet, too often, we are paupers in spiritual currency of real worth: a humble dependence on God producing an experience of his presence, expressed in devoted fellowship, passionate worship and unbridled disciple-making ministry.  (p88)

Putting people into small groups doesn’t make them devoted friends immediately, anymore than planting a few saplings makes a border. But given time, what develops, like a carefully laid hedge, is strong and intertwined and becomes a place for others to take refuge in.  (p99)

I would contend strongly that there is an environmental problem with larger gatherings that violates against a sense of belonging and family intimacy by which biblical church is defined.  (p100)

[Re Spirit-led worship]  Freedom exalts God and puts every believer on the same plane, regardless of status or office, and reflects the New Testament pattern perfectly. But this is too risky for the timorous human heart. It might get out of control (Whose control, we might wonder?). Traditionalists respond with liturgies, conservatives with orders of service, and charismatics with worship leaders. Each of these ultimately controls God’s people, domesticating their worship with the frequent, dire result of the Holy Spirit being quenched.  (p117)

Most meeting set-ups resemble a concert rather than a participating body. No wonder gifts of the Spirit are becoming as rare as hen’s teeth in many places, as people receive the subliminal message, ‘You are here to watch’.  (p119)

In adopting the simple forms and radical-disciple lifestyle advocated in these pages, we will be preparing both spiritually and practically for a time that is coming on soon, when Christians and their message will be no longer enjoying acceptance by society.  (p140)

The huge number of once-keen church members who have haemorrhaged from the church in the past two decades is evidence enough that we need a return to grassroots church forms, where every person belongs, is cared for as a friend, and fulfils a vital role.  (p143)

I love to think that there are ‘churches’—functioning gatherings of believers—that don’t yet realise what they are. You see, you don’t need a group of forty, a full-timer and a building to start a church. It could be three devoted friends with open homes and hearts to reach out, surely a wineskin God loves to fill with his best vintage!  (p150)