Organs and Harps: Music in worship

Worship and music are like Siamese twins—separated only with difficulty.

Whenever hearts leap in response to the mercies of God, hands reach for musical instruments. Heirs of Jubal[1] have played music in every generation. Miriam played her tambourine to celebrate God’s rout of the Egyptians in the Red Sea.[2]  David the shepherd boy took up his harp to sing to the Lord who shepherded him[3] and later, as King David, organised a levitical choir and band.[4] 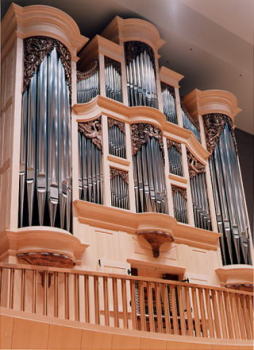 In Christian worship, music has been in and out of fashion. For centuries the unaccompanied human voice was preferred because instrumental music had unhelpful associations—either Jewish or pagan. Augustine, describing the singing at Alexandria under Athanasius, observed that ‘the pipe, tabret and harp are here associated so intimately with the sensual heathen cults, as well as with the wild revelries and shameless performances of the degenerate theatre and circus, that it is easy to understand the prejudices against their use in the worship.'[5]

In similar vein, Clement went to extraordinary lengths to dodge the instrumental implications of Psalm 150. To him, trumpet, lyre, tambourine, strings, flute and cymbals represented parts of the human body. So the ‘strings’ were the body’s sinews and ‘the mouth is a lute, moved by the Spirit as the lute is by the plectrum.'[6]

A new phase began in early medieval times when Pope Gregory I introduced the Gregorian chant, or plainsong. It was a fashion that would last for a thousand years. Without harmony or polyphony, it took a simple melodic line, without accompaniment, and was sung by priests and choir only, not by the congregation.

Then, sometime between the seventh and ninth centuries, the organ appeared in Christian worship, introduced, it would seem, from the courts of the princes of Europe—but only in the West. The Eastern church preferred to stick with the human voice. And even in the West the introduction of the organ was long delayed by stiff opposition from the monks.

The sixteenth-century Reformation saw a massive reaction against the traditional practices of the Roman Catholic Church, including its music. Scouring the New Testament for guidance, the Reformers observed that it contained not a single reference to any musical instrument. Accordingly, John Knox wrote off the organ as ‘a kist (chest) of whistles’ while Martin Luther, with characteristic bluntness, declared that ‘the organ in the worship is the insignia of Baal’.[7]

It was not until the eighteenth century that organ music to accompany singing became general in Protestant churches. Even then, many frowned upon it, believing that the unaccompanied voices of the congregation were the only fit expression of Christian praise and worship. John Wesley was one of them. He stated, ‘I have no objection to instruments of music in our worship, provided they are neither seen nor heard.’ It surprises many today to learn that the wonderful hymns composed by his brother Charles were intended to be sung unaccompanied.

Things remained much the same in the nineteenth-century. The Church of England had embraced organ music, but most Nonconformist groups gave it little or no room. The ‘prince of preachers’, C.H. Spurgeon, who every week preached to thousands in his London Metropolitan Tabernacle, would allow no instruments. ‘What a degradation,’ he proclaimed, ‘to supplant the intelligent song of the whole congregation by the theatrical prettiness of a quartet, bellows and pipes. We might as well pray by machinery as praise by it!’

But William Booth, the founder of the Salvation Army, took a different view with his famous rhetorical question, ‘Why should the devil have all the best tunes?’ His military-style brass bands playing catchy tunes to Christian words introduced a new, popular dimension to church music, though the bands tended to remain a speciality of that denomination only. Elsewhere, instrumental accompaniment tended to be fairly low-key, often in the form of a pedal-organ, a piano or a simple electric organ.

In my youth I was in the Brethren. We sang unaccompanied at the Sunday morning communion service—the ‘Breaking of Bread’—but used the harmonium (pedal organ) for the evening ‘Gospel Meeting’. I once asked a respected elderly sister why we didn’t use the organ at the Breaking of Bread. Her reply baffled me then and baffles me still: ‘It’s because the organ is the wooden brother who hasn’t been baptised’! Later, a more rational member explained the real reason. At the Lord’s Table no-one should be distracted from entering fully into worship by having to play an instrument, whereas the use of the organ at the Gospel Meeting was a justifiable concession to unsaved people who, coming into the meeting, would probably be more comfortable with an accompaniment.

Whatever you think of that reasoning, there’s no denying that praise a cappella has a long and worthy pedigree in Christ’s church. I certainly have warm memories of our Sunday morning worship, where several people with the natural ability to harmonise gave the unaccompanied singing a special richness.

I first got a guitar in the early 1950s, when I was twelve. A few years later I was using it in the church youth group. Then we introduced the use of a small electronic organ into the Breaking of Bread. Soon, we began using both organ and piano together in the evening meeting, followed in due course by other instruments: tambourine, guitar and flute. And the changes did us no harm.

In more recent years, at least outside of the more formal denominations, it has become the norm to have a ‘worship band’. With sensitive musicians a band can be a huge asset to the praise and worship. The key word, however, is ‘sensitive’. Too often, church bands take their style from pop groups and hike up the volume on their amps to match the decibels that vibrate the walls in night clubs. They end up driving the singing, not accompanying it, and too much input from guitars and drums forces every song into a heavy rhythmic mode which isn’t always appropriate.

There must be room for some balance here. Henry Baker’s hymn, Oh praise ye the Lord, dating from the nineteenth century, seems to get it right. He first calls upon the people of God to raise their voices in praise to him:

Then he acknowledges that instruments of many kinds can supplement the human voices:

Oh praise ye the Lord,
All things that give sound;
Each jubilant chord
Re-echo around.
Loud organs, his glory
Forth tell in deep tone,
And sweet harp, the story
Of what he hath done.

Organs and harps. You couldn’t find two more contrasting instruments, yet each can enhance the worship of God’s people. Let the organist have his head from time to time till the whole building rumbles with thunderous praise. At other times the delicate sound of the harp is more apt. By all means bring in the brass band now and again, or the glockenspiel, the cello or the oboe. But let there also be times when no instrument is heard at all.

Not many Christians today would want to revert to unaccompanied singing as the norm. But surely there is room for it to happen from time to time. And what instruments we permit must serve the singing, not dominate it. That means a commitment to sensitivity on the part of musicians and strict restraints on the use of the volume knob. The human voice is still the best ‘instrument’ and deserves pride of place in the worship of God.