Open theism has made a big impact among Evangelicals in recent years, giving a third option alongside the Calvinist and Arminian views of divine providence, and their versions of theodicy. This book is firmly in this third category. It is:

The Uncontrolling Love of God: An open and relational account of providence by Thomas Jay Oord (IVP Academic, 2015). 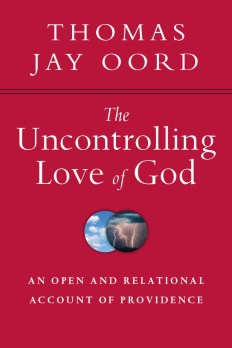 It deals with the age-old question of why, if God is all-powerful, does he not prevent the appalling evil that scars our world. Most of the traditional answers are anything but convincing, appealing in the end to ‘mystery’. Oord contends that God, in fact, cannot unilaterally prevent purposeless, gratuitous evil, just as he cannot lie, deny himself or make a square circle.

He grounds this conviction on what he calls ‘essential kenosis’. We normally associate the term ‘kenosis’ with Philippians 2:7, which says that Jesus, in his incarnation, ‘emptied himself’ or ‘made himself nothing’. But because Jesus is the complete revelation of what God is like, Oord contends, God’s essential nature is eternally kenotic. By that he means that God’s love, not his sovereignty, is his defining feature, and love, by definition, does not control. God thus leaves the beloved space to respond willingly to his love and, inevitably, risks being spurned.

God can, of course, work within the created order to influence, call or persuade, but he cannot control, and therefore cannot stop humans killing, raping etc. Nor can he alter the random natural processes that produce suffering and pain, like earthquakes, genetic mutations etc. If he were to interfere, it would be a revoking of the gifts he has given and by which the world operates.

While this approach lets God off the hook for the evil in the world, it perhaps leaves some unanswered questions. How, for example, is God ever going to fulfil his ultimate purpose to make all things new in Christ if he is permanently limited by the shortcomings of his much-loved creation? And while Oord believes in miracles, his explanation of how they fit into the ‘essential kenosis’ scenario is not altogether convincing, in my opinion.

But that doesn’t mean that his book isn’t worth bothering with. It has some fine insights and some interesting angles on particular scripture passages. Well worth a read!

[Here are some quotations]

My overall goal is to make sense of randomness and evil in light of my conviction that a loving and powerful God exists and acts providentially.  (p10)

Many Christians have ignored biblical passages that speak of chance. Like Rick Warren, they have believed that accidents are just incidents in God’s predetermined story. For them, randomness and chance are ultimately unreal.  (p30)

Life is an open-ended adventure, not an already settled script.  (p38)

Any design we encounter—and we encounter design often—comes from randomness, regularity and other forces, including God. Because of this, arguments pitting evolutionary randomness against design and organization are usually misguided.  (p43)

Libertarian free will supporters are incompatiblists because they believe we cannot be simultaneously free and entirely determined by other forces. In other words, free will and complete determinism are incompatible.  (p59)

Being morally responsible is impossible if free will is an illusion.  (p60)

Most often, believers who wrestle with the problem of evil say God loves perfectly and can control others entirely. Because these believers cannot reconcile their beliefs with the genuine evil they experience, they appeal to mystery…   Those who appeal to mystery still usually say we should oppose genuine evil. “God calls us to work to make the world a better place,” they may claim. But it is hard to be motivated to oppose that which an omnipotent God allowed.  (p64)

If we look for it, we will notice goodness all around. Virtue is far more common than we may realize.  (p70)

I can think of numerous evil events a voluntarily self-limited God should have prevented by momentarily becoming un-self-limited. Victims of horrific evils likely have their list of events too. Saying God allowed or permitted but did not will evil offers little comfort. A perfectly loving God should and would prevent genuine evil if it were possible.  (p92)

The model of God as voluntarily self-limited thinks self-limitation is a free divine choice. It begins with the idea that God essentially has the capacity to control others entirely, and God could choose not to self-limit. But God freely chose at creation or, usually, chooses in history thereafter not to exercise the capacity to control others entirely. The model of providence as essentially kenotic, by contrast, portrays God’s self-limitation as involuntary. God’s nature of love logically precedes God’s sovereign will. This means that God’s self-limiting kenosis derives primarily from God’s eternal and unchanging nature of love and not from voluntary divine decisions. Because God’s nature is love, God always gives freedom, agency and self-organization to creatures, and God sustains the regularities of nature.  (p95)

Forty or more Old Testament passages say God has a change of mind, which suggests God does not foreknow the future in its entirety.  (p110)

By the end of the twentieth century, it seemed the majority of Christian scholars rejected the classical view of impassibility. Most believed God to be relational because God affects others and others affect God.  (p125)

The alternative to a risk-taking God model is some form of theological determinism. Outcomes are guaranteed only if God controls others. Robots can be trusted to comply, but free creatures may hinder divine plans.  (p135)

Sanders’s position seems to imply that voluntarily giving freedom to others is always the most loving thing God can do. But is this true? Is giving freedom when it could be restrained always an act of love?  (p142)

I follow the contemporary trend of interpreting kenosis primarily as Jesus’ qualified power, other-orientation and servant love. This interpretation seems more fruitful overall than discussions about what might be communicated between Christ’s two natures, although I think such discussions have their place.  (p156)

Although no translation is perfect, the most helpful rendering of kenōsis may be “self-giving”…   Kenōsis translated as “self-giving, others-empowering love” corresponds well with passages found throughout Scripture.  (p159)

Realizing that God cannot unilaterally prevent suffering caused by simple entities helps us make sense of suffering caused by natural malfunctions or disasters. This means, for instance, we should not accuse God of causing or allowing birth defects, cancer, infections, disease, hurricanes, earthquakes, tsunamis, or other illnesses and catastrophes. The degradation brought by such calamities does not represent God’s will. Instead, we can blame simple structures, various natural processes of the world, small organisms or creation gone awry.  (p172)

As an omnipresent spirit with no localized divine body, God cannot exert divine bodily influence as a localized corpus. This means God cannot use a divine body to step between two parties engaged in a fight, for instance.  (p178)

Although Jesus can be angry or even exert strong force on occasion (e.g., clearing the temple), Jesus never acted coercively in the sense of controlling others entirely. The a posteriori evidence of the life of Jesus, whom Christians believe reveals God better than any other person, suggests that God does not coerce.  (p184)

God is almighty in at least three senses. God is . . . mightier than all others. the only One who exerts might upon all that exists. the ultimate source of might for all others…   God’s almighty power in these three senses does not involve coercion. God can be the mightiest without controlling others. God can exert power upon all creation without unilaterally determining any. God can be the ultimate source of power—empowering and enabling others—without dominating any creature or situation entirely. Almighty is not coercive.  (p189)

Instead of thinking miracles are entirely in the mind of the observer, I think they are objective events in the world. Instead of defining miracles as violations of natural laws or divine interventions, I think God is already present to and active in all creation. Instead of believing miracles require supernatural control, I believe miracles occur by means of God’s uncontrolling love in relation to the universe and its creatures.  (p196)

We have no evidence on which to argue that God ever acts miraculously in a vacuum. Essential kenosis presumes that creaturely causation of some kind is present in all miracles, even when biblical narratives do not identify the creaturely causes.  (p207)

In this miraculous activity, God’s steadfast love does not supersede the lawlike regularities of nature, and God does not control. But God coordinates creaturely elements in ways that bring about unexpected and good results. This coordination is possible because of God’s omnipresence and complete knowledge of what has occurred and is occurring.  (p209)

Essential kenosis removes the “selective miracles” reason for rejecting special divine action. God never has and never can control others entirely when acting miraculously. God does not selectively coerce to enact miracles for some people but not for others because control-based selectivity is not possible for the God whose nature is kenotic love.  (p213)

Even when we consciously say yes in faith to the divine desire for our well-being, our bodies may not cooperate with God’s healing plans.  (p213)

Essential kenosis offers an adventure model of reality. This model may strike some as a precarious paradigm of providence. Adventures aren’t safe, after all, because they have general goals, not predetermined designs. Adventures involve calculated risks, free decisions and sometimes random occurrences. Love is an adventure without guaranteed results.  (p220)