Familiarity breeds contempt. For evangelical Christians, no Bible verse is more familiar than John 3:16. As you know, that’s probably the ‘gospel text’, much used by Christians to explain the gospel to enquirers. It says:

God so loved the world that he gave his one and only Son, that whoever believes in him shall not perish but have eternal life. 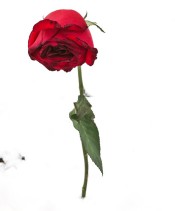 Wonderful! But because I don’t want to let familiarity breed contempt here, I’ve been trying to look at this glorious statement with fresh eyes.

As a result, I’ve realised that people, almost without exception, take ‘have eternal life’ to mean ‘go to heaven when you die’, and ‘perish’ to mean ending up in the other place. Is that justified? Well, it’s certainly open to question.

The first part of the verse is no problem: God’s love for the world motivated him to give his Son. And, as a result of Jesus’ life, death and resurrection, putting our trust in him is altogether beneficial. No issues there. It’s in the second part that we are conditioned to think we know what it means: the perish’ and ‘eternal life’ bits.

Take ‘eternal life’ first. Older Bible versions tended to have ‘everlasting life’, emphasising its duration. But because Bible translators realised that this doesn’t do justice to the original Greek, more recent versions go for ‘eternal life’, which doesn’t home in on duration and is, to be honest, a bit fuzzier to the average English reader.

The Greek words mean, literally, ‘life of the age’—that is, ‘the age to come’, which will be inaugurated at Christ’s return, when the ‘new heavens and new earth’ will burst upon us in all their glory. But the life of that age is available today. We could say that the age to come has, to an extent, overlapped with the present age. It has moved back through history to make some of its benefits available now. The primary benefit is ‘life’—life of a superior quality, the life we enjoy in union with God through Christ.

As the book of Hebrews puts it (6:5), those whose trust is in him ‘have tasted…the powers of the coming age.’ Sure, it’s far from the full banquet that we shall enjoy then, but it’s a superb ‘taster’ to keep us going. and transforms our everyday living. Jesus said, ‘The one who believes has eternal life’ (John 6:47). Since we have it now, the emphasis is more on the quality of that life than on its duration—though its endless duration is taken for granted. It begins the moment someone decides to commit their life to Jesus, so we err if we see it purely as an afterlife benefit.

And what about the ‘perish’ bit? Is that a reference exclusively to fire and brimstone? To the lake of fire? Far from it. To live life without God is to be perishing here and now. That’s why Paul refers several times to ‘those who are perishing’ (e.g. 2 Corinthians 2:15). Without the sense of purpose, direction and forgiveness that comes from staking all on Jesus, people are perishing daily. They are struggling with a sub-standard existence. And the gospel offers relief from that grim condition: if they believe, they can exchange it for ‘eternal life’, starting right now.

Does the ‘perishing’, like the ‘eternal life’, have a longer-term aspect? If, after a life of perishing, I die without consciously putting my trust in Jesus, am I doomed to go on perishing forever?

Some say yes. But deep down it’s doubtful if they really believe it. They probably just believe in their belief in it. No crime, or lack of trust in Jesus, committed in the infinitesimally brief confines of a human life, merits everlasting suffering, especially in the type of hell portrayed in Dante’s Inferno. And how could a just God impose that on the billions who, for one reason or another, have departed this life without even hearing about Jesus? A God who would do that is not, in my view, the God who ‘so loved the world…’

Most evangelicals have been schooled to believe that death is the cut-off point, after which one’s final destiny is sealed—you make your choice in this life and reap the endless consequences in the next. But when I’ve asked people to give their reasons for that conviction, I’ve always got vague, unconvincing answers.

Surely God’s love, and his reach, extend beyond the grave? And if ‘God was reconciling the world to himself in Christ’ (2 Corinthians 5:19), how can he be satisfied with a partial outworking of it? So if, post mortem, some fiery cleansing of clinging earthly defilement or unbelief proves necessary, will it not result in every sinner’s ultimately being drawn through by God’s love to a place of acceptance, and the enjoyment of ‘eternal life’? That’s the way the early generations of the church interpreted the apostle Paul (1 Corinthians 3:15). It’s a pity we have lost that.

I recently posted a review of a book on universalism. It upset some evangelicals. One responder asked, ‘What’s the point of bothering to preach the gospel if, in the end, God saves everybody?’ The answer is, ‘Because people are perishing now!’ Are you going to let them carry on stumbling through life without the grace and blessing that Christ brings? Or are you going to offer them ‘eternal life’—now?

John 3:16 remains the great gospel text. Give it some breathing-space!