I’ve seen a couple of sad scenarios recently, both in workplaces. A new boss or supervisor has been appointed. They arrive, and within a week or two have managed to create chaos and upset all their underlings. The result? Bad feelings all round, soured relationships between them and their staff, and a poorer service to the folk the business serves.

This happens too often, so, from the wisdom that has accumulated in my old age, I offer some advice to you if you’re about to take on a new post that carries authority.

‘A new broom sweeps clean’ says the proverb. And that’s the problem. You go into your new post determined to make your mark, to stamp your authority on the setup and to crank up the levels of progress and efficiency. You’ll sweep out the way things were done before you arrived and lay a new carpet, one with your name woven into the design in capital letters.

Well, here’s the advice: don’t do it!

Why? Because it never works out well. In the end, people are what count, and your relationship with the employees you are now in charge of needs to be kept as sweet as possible. Over the years, many of them will have helped shape the way things are being done, so if you barge in and bin it all, you are effectively saying to them, ‘You’re a bunch of visionless incompetents’—which won’t make them like you.

Far better to let the existing systems carry on for a month or two, while monitoring them carefully. Focus on getting to know the employees under you and seeing what makes them tick. Yes, some of them might be lazy and self-serving. Take note, and bide your time. But most will be decent people, keen to do a good job for the company and to enjoy their work. Note them, too, and bide your time.

In due course you will be ready to make some changes. But evolution is always better that revolution. Introduce the changes gradually and carefully. Consult first with a few trusted folk, asking them how they would view it if you were to introduce this or that change. You won’t be able to please all of them all the time, whatever you eventually do, but the fact that you have at least consulted them will weigh in your favour.

Then check your own motives. Why do you want to make big changes? Could there be just a smidgin of pride in you that says, ‘Haha! I’m the one in charge now, and I’m going to show them who’s boss’? That’s not a sound reason for changing things. Are you secretly power-hungry, getting a dark sort of satisfaction from making people dance to your tune?

Or maybe there’s a level of deep insecurity in you that craves recognition and obedience from others. If so, you will be bound to over-compensate by becoming authoritarian to a degree unwarranted by your position. And that will alienate everybody.

So, be a new broom with soft bristles. Sweep slowly and sensitively. Keep people on your side. Let them see that you consider them more important than systems and targets. And so may the company prosper! Imagine the after-work conversation between two of your employees, where one says to the other, ‘Tell you what, it’s been tons better working here since [your name] came.’

Apostolic authority: executive, advisory or what?

After centuries on the scrap-heap of cessationism they’re dusted down and back with us. And rightly so. I’m amazed at the attempts to argue that apostles, along with prophets, were intended for the first century only. After that, it’s said, evangelists, pastors and teachers enjoyed a continuing ministry while the other two became redundant (see Ephe 4:11).

Why they became redundant is disputed. Some hold that the emergence of diocesan bishops did it, others that the finalising of the New Testament canon left us with completed Scriptures which evangelists, pastors and teachers could adequately apply. 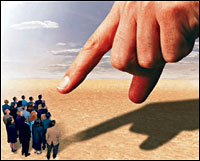 Neither reason stands scrutiny. Diocesan bishops appeared in imitation of the pattern of civil government in the Roman Empire where the church began. Certainly they have no basis in Scripture, where the pattern of church leadership was presbyterian—multiple elders. And the finalising of the canon is irrelevant. Paul insists that the church needs apostles and prophets—as it does the other ministries—’until we all reach unity in the faith and in the knowledge of the Son of God and become mature, attaining to the whole measure of the fulness of Christ’ (Eph 4:13).  That’s a goal that still seems some way off.

It’s the ‘new churches’ that seem to have embraced apostles most readily since the 1970s. While their definition remains blurred at the edges, apostles generally provide objective outside help and direction to local leaders. They are travelling men, jetting here and there to dispense their wisdom and experience to God’s people across the nations.

It doesn’t help that, like American televangelists, many of them drive expensive cars and enjoy an affluent lifestyle. Jibes about ‘apostles and profits’ are not always undeserved. Certainly Merc and Lexus drivers don’t seem in place ‘on display at the end of the procession, like men condemned to die in the arena.’ And not many of today’s apostles, at least in the West, can say like Paul, ‘To this very hour we go hungry and thirsty, we are in rags, we are brutally treated, we are homeless. We work hard with our own hands’ (1 Cor 4:9-13).

But a more contentious issue than apostolic affluence is that of apostolic authority. Is it, in the final analysis, executive or advisory? Can the apostle overrule local church leaders, or does he have to settle for expressing an opinion and leaving the final decision to the local men? Opinions are polarised, both among apostles themselves and among those they oversee.

See how Paul deals with the case of incest in Corinth, says one (see 1 Cor 5:1-12).  He goes straight over the heads of the church leaders—in fact he doesn’t even mention them. ‘Do this, do that,’ he insists in a masterly way, with no hint that he’s merely giving advice. No, this is executive authority of the classical kind and he clearly expects to be obeyed. An apostle is an apostle, and today’s bearers of the name should take the same line.

But, says another, Paul was a towering figure, a ground-breaker among the Gentiles. Nowhere do we find lesser apostles like Barnabas or Silas taking an executive line, and most if not all of today’s apostles are surely men of the lesser variety. And, anyway, how could a church like Ephesus survive if it depended on the executive oversight of an apostle who told the local elders ‘that they would never see his face again’ (Acts 20:38)? He was clearly leaving the governmental ball in their court.

So that’s the issue. But do we have to come down on one side or the other? Cannot an apostle’s authority be either executive or advisory depending on the circumstances? I believe so. We have a clue to this approach, perhaps, in one of Paul’s statement to the Corinthians. In the context of his apostleship he reminds them that ‘in Christ Jesus I became your father through the gospel’ (1 Cor 4:15).

I’m a father myself—to three grown-up children. When they were young I didn’t ‘advise’ them to put their toys away at bedtime, share their sweets or stop spitting on the table. I took an executive role, dispensing appropriate sanctions for disobedience. But always my aim was to get my kids to the point where I could gradually back off and let them run their own lives. I didn’t want them coming to me at the age of thirty-five asking, ‘Daddy, will it be all right if I buy a bar of chocolate?’

During the teenage years, when the backing off had begun and my role had become more advisory, there were times when I had to revert to an executive role to get them out of problem situations. But as soon as things were back on course I was advisor again. Now they’re all out of the nest and running their own lives successfully. I like to think that my handling of the fatherly role had something to do with it. We enjoy as strong a relationship as ever, and I appreciate it when one of them seeks my advice. But advice it is—no more.

An apostle is a father to the churches he oversees. His role must of course be executive towards an infant church with a youngish and newly-formed local leadership. They are inexperienced and probably naïve. Without his firm yet loving direction the church will die young. But he must surely be aiming to see them grow up, with leaders becoming strong and mature, modelled on his own fatherly example. From time to time, having backed off to a large degree, he may need to step in to resolve complex issues—and to do so in the expectation of being obeyed. Maybe that’s how it was with Paul and the case of incest in Corinth.

But an apostle who insists on a permanently executive role is asking for trouble. He can only produce a brood of perpetual dependants who will keep him spinning plates till he keels over with exhaustion. Or they will grow tired of being treated like permanent infants and run away from home to seek their fortune under more trusting apostolic oversight.