There seems to be, these days, a steady flow of new books about what the Bible isn’t and is. I find this very heartening; many of the problems evangelicals are encountering today stem from an unhealthy adoration of the Bible, and untenable ideas about its inerrancy. So it’s good to see a respected author like Nick Page weighing in on the subject. The book is

The Badly Behaved Bible: Thinking again about the story of Scripture by Nick Page (Hodder & Stoughton, 2019). 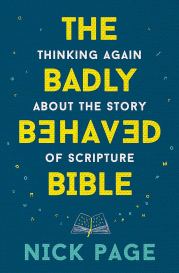 Nick is known for his unique mix of humour and serious issues, and he lives up to that reputation in this, his latest work. Our difficulties with the Bible, he maintains, arise from the fact that we have been misinformed about it. We expect it to be something it’s not. And the way to find a better position is ‘to stop studying it’. He brings balance to our perception of what ‘the word of God’ is, and what ‘inspired’ means in relation to the Bible, and his answers are not the usual mainstream ones.

He faces up to the complexities of the canon and its formation. He makes a strong case for the prominence of the ‘story’ aspect of the Bible, and how this requires us to respond to the text. He faces the unsavoury bits of Scripture head-on, and pulls no punches in his assessment of them. For every point he makes, he pulls together lots of biblical instances. Like the Christmas story which, in today’s world is a long way from what the New Testament says and means.

A key focus is the plain fact that the Bible portrays a people whose understanding of God is constantly developing, so that we get contradictory views about him at different stages of Old Testament history. Hence the folly of trying to reach a composite biblical view of what God is like; it just can’t work. God is like Jesus; end of story.

I like the way that Nick Page, a totally committed Christian, extols the virtues of doubt. It

is a key part of the lives of all who are honest about their spiritual journey. He gives examples from various Bible characters and cautions his readers against equating doubt with backsliding. Well done! His tackling of the theodicy issue in this respect is brilliant.

He cautions against a blind ‘obedience’ to the Bible; it isn’t that kind of book. He shows how both the Law and the Prophets changed position on various issues, so which one should we obey? In practice, we all pick and choose the bits we prefer, opting, for example to insist on tithing but to look down on tattoos.

He covers all the major topics that Christians have tended to ignore, like the violence in the Bible and God’s commands to commit genocide. His answers are convincing and clearly argued. Ancient approaches to writing history were a far cry from modern historiography, and we should expect the ancient Bible texts to conform to it. And he examines the way Jesus and the New Testament writers treated OT scripture in a cavalier manner, with little regard to its original context.

He concludes with some wise guidelines for reading and using the Bible today. They are sensible, balanced and workable. So read Page’s book, and start putting his advice into practice!

[The numbers that follow are Kindle location numbers, not page numbers]

We are told that the Bible is inerrant, infallible and without contradiction, and then discover that there are two different creation stories and two versions of the Ten Commandments and the Lord’s Prayer, and that the New Testament writers misquote the Old Testament. Not only that, the Bible thinks the world is flat, with a big domed canopy above it to hold the water out.  (72)

Many of the saints whose Christlike lives changed their world were illiterate. For them, the right way to read the Bible was simply to listen to the stories, to learn the texts and to live it out.  (150)

For the early church the ‘word of God’ was not the written text, but the spoken gospel: it refers to words said, not words read.  (325)

The Bible was written and compiled by humans, but God filled it with his presence.  (452)

If we insist on seeing the books as one unified work then we will always have problems with the fractures, the edit points, the duplications and the differing details. But if we just let the text speak for itself, then a different picture emerges: one of collaboration and careful preservation, one of multiple authors and witnesses, each doing their bit to tell the great story of God and humanity.  (867)

Countless sermons and talks give the impression that characters in the Bible are really just like us, only with loincloths and more sheep.  (1797)

The Bible shows us people as they are, not as how we’d like them to be. Samson slept with prostitutes, Abraham passed his wife off as his sister, Jacob was a blasphemous liar, Joseph was a spoilt brat, Moses disappointed God so badly that he wasn’t allowed to enter the Promised Land, and Solomon, as well as building the Temple, ended up worshipping all kinds of other gods and marrying any woman with a pulse. And it’s not just in the Old Testament. Peter flip-flopped between eating with Gentiles and not eating with them. Jesus’ mother and brothers thought he was mad. And Paul had the temper of a bull hippo with a toothache.  (2052)

For much of the Old Testament history they believed that there were loads of gods, but Israel’s was the best.  (2223)

What I’m trying to show here is that (a) Israel’s concept of who God is changes through time, and (b) much of the Old Testament assumes the reality and presence of other gods.  (2249)

So much of our theology is built on the idea that everything is in God’s plan, but what if that doesn’t mean quite what we think it means? How much does our disobedience and our failure come as a surprise to God? How much does God change his mind? Is he playing the great tune of history from a written score or is he a jazz improviser working within patterns but always adapting creatively?  (2420)

Israelite ideas about who God was and what he was like changed and developed over the centuries. So we often find theology in the Bible that is either wrong or incomplete. Because the people in the Bible are still trying to work things out.  (2462)

People will insist on trying to turn the Bible into a systematic theology. But the Bible refuses to behave that way. There’s nothing systematic about the Bible, largely because it’s about humans who, despite valiant efforts throughout the centuries by various philosophers and sages, generally tend to prefer unsystematic thinking. The Bible isn’t a unified theology, but it is a unified story. Stories don’t deal in systematic thought. Stories may be used to challenge and explain, to connect and to work things out, but they do it by inviting us to think, not telling us what to think.  (2514)

The contradiction between doctrine and real experience: that’s what doubt is all about.  (2623)

Monotheism brings with it a problem: if there is only one God, then who can you blame for the bad stuff?  (2638)

[Re Job]  Yahweh accepts the challenge. He allows The Satan to put Job to the test. (It seems to me that, right away, we’re in a work of fiction. And if you don’t think this is a work of fiction, then you have some explaining to do as to why God kills people and tips Job’s whole life down the toilet simply to win a bet.  (2759)

Churches that deny oxygen to doubt and questions are really protecting not the Bible but the pastor.  (2914)

I am convinced that our failure to bring lament into our acts of worship is one of the reasons why so many people drift away from the Church.  (2979)

Gifts need to be given. People need to be paid. But it’s no longer a law. The tithe as it was originally stated no longer holds force. You can’t claim that tithing is obligatory for Christians from the Bible.  (3251)

Ultimately, I believe the authority of Scripture means the authority to live like Jesus. I’m a Christian. I’m not a follower of Paul of Tarsus or Moses or Isaiah.  (3412)

A disciple is one who learns by imitation – in this case by centring our whole life on the presence, teaching and example of Jesus Christ. This is why in your canon within the canon the Gospels have to take pride of place.  (3412)

If the Bible has authority in my life, then it will not be as a set of rules and regulations telling me exactly what to do in any circumstance, but as a story that authorises me to act in a Christlike way.  (3425)

All this – the hyperbole, the formulaic writing, the presence of different traditions within the Bible itself – should alert us to the possibility that the account of the conquest is not documentary history as we would write it today.  (3576)

If you have found this interesting, you might like to look at my own e-book on the subject, entitled A Poke In The Faith. You can find it here.

This entry was posted on Wednesday, November 27th, 2019 at 17:08 and is filed under Book Review. You can follow any responses to this entry through the RSS 2.0 feed. You can leave a response, or trackback from your own site.

One Response to Badly Behaved Bible